St Anne’s Diocesan College in Hilton recently hosted a once-off, quite extraordinary, collaborative artistic endeavour. The event was a musical concert with a difference. St Anne’s hosted the choirs of both Maritzburg College and Epworth High School for an evening filled with memorable choral performances.

The high point of the evening came in the final five minutes: a creative collaboration between the St Anne’s Visual Arts Department and the school’s 80-strong choir, featuring live painting on two massive canvases as a backdrop to the choral performance. The audience was spellbound. The concept was the brainchild of music teacher Bryon-Mahieu van der Linde who said, “Although the concept seems simple, it is seldom explored. Analogous collaborations are usually only seen in big theatrical productions (music theatre or opera), but then artistic rendering is usually completed before the musical component is added. Certainly within the paradigm of South African amateur chamber music, no projects incorporating live painting and live choral singing have been publicised in recent years.”

Van der Linde said that while considering his choral repertoire for 2022, British singer-songwriter Imogen Heap’s Canvas played continuously in the back of his mind. “The message communicated in the lyrics speaks to the multifaceted challenges facing the artist in manifesting art in various mediums. I penned some harmonies and created a three-part choral arrangement for the St Anne’s Choir.”

The theme around the painter who “just can’t find the strength to keep [the canvas] taut” perfectly captures the struggle of the entire artistic process; “birthing the idea of a collaboration with the visual arts department: live painting on a massive canvas during a choral performance,” he said. He pitched his vision to Ayanda Siwila, Art Department head, and Monique van Deventer, visual arts teacher, who were both equally enthused.

“From initially foreseeing only a couple of art students participating, the department was inundated with interest from other girls. Students were encouraged to use their hands instead of brushes to paint empowering them in their creative genius, celebrating their femininity.” said Siwila. She added that the idea “explored the concept of visual art and music, and how the two forms can relay the beauty of sound and emotional communication through the cultural standards of rhythm, melody and harmony.” 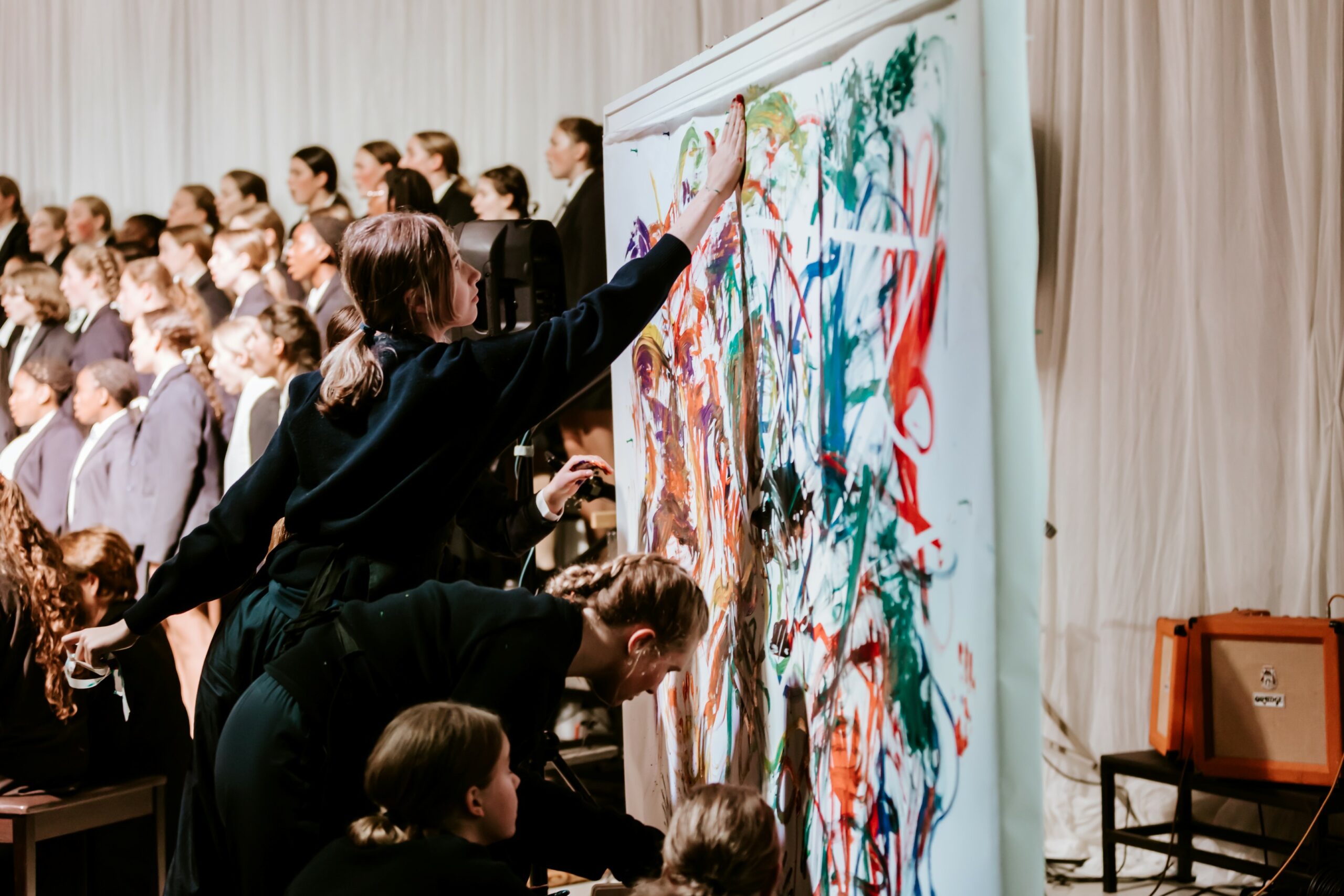 For the performance of Canvas, 13 art students took to the stage alongside the St Anne’s Choir. The stage was flanked by two large canvases, with a group of students designated to each. Each student had equal contact time with the canvas over the 5 minute choral performance. Siwila said, “Influenced by the 20th century artists Wassily Kandinksy and Jackson Pollock, the young artists completed the two action abstract paintings in five minutes while the choir’s angelic voices, the tones and sound of the rain instrument, complemented the composition of colour on the canvases.

“The artists were encouraged to listen attentively to the lyrics in order to articulate their expression. Although experimental, line and colour became important guiding elements, but they also had to pace themselves with the choir. Towards the end of the performance, they intensified their use of colour, mark-making and rhythm.” She said that tape, which had been stuck on the canvases before the painting process, was removed, leaving intersecting, geometric lines.

“The idea of collaboration is highlighted by the tape lines representing the musical component and the expressive impasto technique representing the art. These conceptual artworks speak of how the two disciplines depend on, influence and interact with one another. Art and music aim to teach and thrill the heart and that evening we could actually hear music and colour.”

The outcome was a triumph, concurred Van der Linde, as choristers, art students and audience alike were treated to a singular artistic experience. The choir and instrumentalists verbally and musically communicated the intricacies of the artistic process, while the talented art students demonstrated it in real-time. It was iconic Norwegian painter Edward Munch who said, “The colours live a remarkable life of their own after they have been applied to the canvas.” The two vibrant, painted canvases will be mounted in the St Anne’s Music Centre, a reminder of the power of art to break norms, celebrate individual expression and bring the divergent artistic community together in novel and meaningful ways. 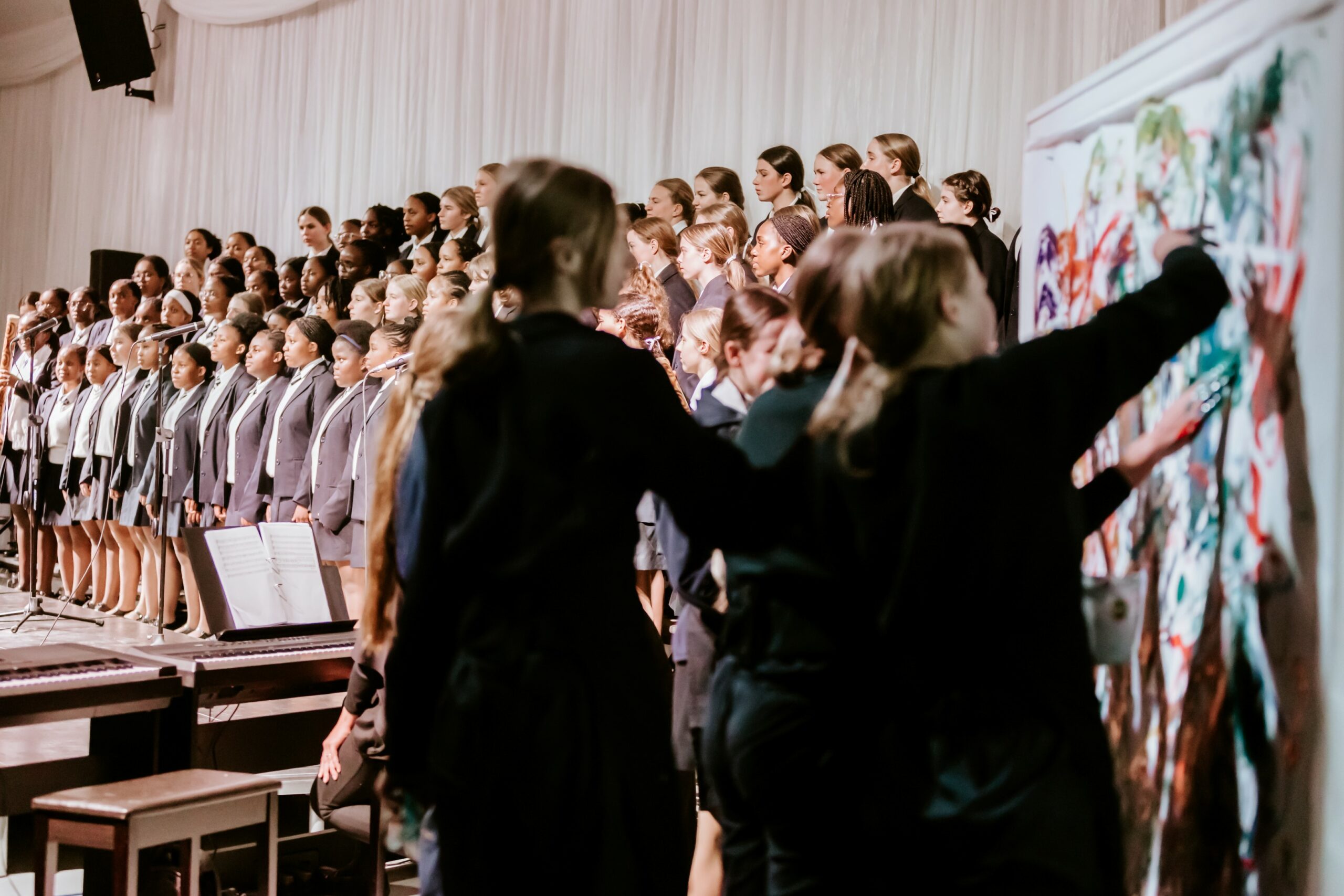