Sekondêre Meisieskool Oranje in Bloemfontein is set to play host to the long-awaited Fairtree Super 12 Hockey Tournament that kicks off this week on Friday 5th August.  This is the country’s top school hockey tournament that will see 12 of South Africa’s best school hockey teams play off against one another for the winner’s title. Matches are played over three days with the final fixture taking place on Sunday 7th August.

The event is planned annually around the public holiday of 9th August – National Women’s Day – and aptly so as this tournament shines the spotlight on female sports, which still does not receive the kind of attention and support that traditional men’s sport gets in our country.

Sekondêre Meisieskool Oranje is undoubtedly the powerhouse of South African girls’ school hockey and currently ranks Number 1 in the country. They have dominated this tournament since its inception in 2014 – walking away with the winning title each year – with the exception of 2018.  The tournament, which went into an involuntary hiatus in 2020 and 2021 due to the pandemic, makes a comeback this year, and all eyes will be on the team to defend their position. This is the first year in the tournament’s history that three Free State schools will be in action. Fairtree is on board for the first time this year as title sponsor for the 1st hockey team and also the Fairtree Super 12 Hockey Tournament. Kobus Nel, Group CEO for Fairtree says: “We are truly honoured to be part of this very special event where South Africa’s top girls’ school hockey players can showcase their skills and where we will celebrate excellence, dedication, and determination. At the heart of everything we do at Fairtree is our purpose to enrich the lives of all our stakeholders, including our sponsorship partners. We believe our primary role is to be a real partner to the teams, the schools, and the communities we support and to help them to achieve their individual and collective callings.”

The school bids a sad farewell to Coach Morné Odendaal this month – the man who has led their hockey teams to victory over the past decade.  He will be pursuing an opportunity in the USA and he leaves a legacy of excellence and an indomitable fighting spirit that sets a strong foundation for the future. During his tenure the school has won just about every major regional and national hockey league, match and tournament, including winning the St. Mary’s hockey festival from 2014 to 2017 and again in 2019 and 2022; being named Tops Schools Winners in 2021; All Girls’ Festival winners (2013-2019); Free State Cup winners (2013-2019); and Bloemfontein League winners (2013-2019 and 2022).

Captain of the Oranje 1st Hockey Team this year is 18-year-old star player Ané Janse van Vuuren (Grade 12), who is also a member of the Southern Free State u18 and u21 sides and SA u18A. She was named Best u16 Player in South Africa in 2019. “I am so proud to lead our all-girl team of dedicated players this year,” she says. “This will be my final Super 12 Schools Tournament and I and the team will be giving it all we’ve got.” The Super 12 Hockey Tournament has an interesting history, with the first match in this competition, initially called the Super 8, taking place on Thursday, 7 August 2014 between Sekondêre Meisieskool Oranje and DF Malan with the hosts prevailing by 4 goals to 0. Entrance to the tournament is free and there is ample parking available on and around the school grounds.

For those who cannot attend: Please catch the results HERE:    Or watch HERE: 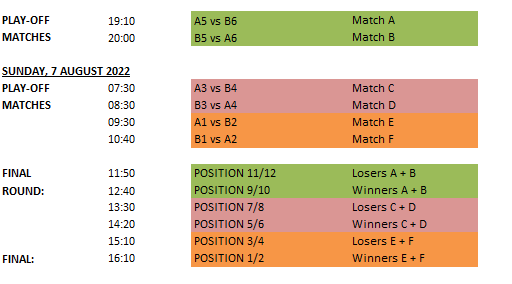